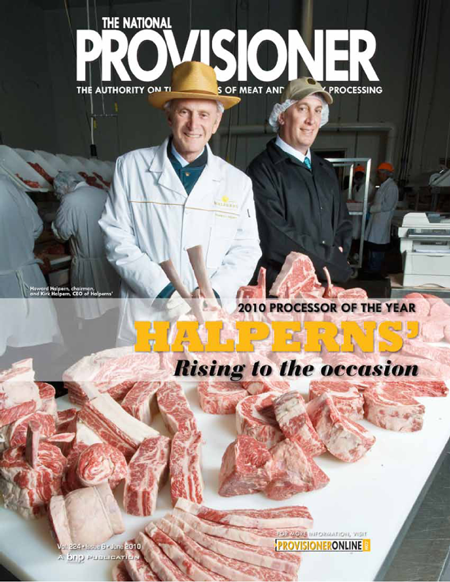 Anyone in the meat industry knows the country's economic struggles have hit the foodservice sector particularly hard, with the higher-end restaurants faring the worst. Conventional wisdom would then say a regional, independent steak and seafood purveyor, catering to white-tablecloth restaurants, hotels and casino properties while competing with broadline distributors would be at a tremendous disadvantage. Halperns', however, is anything but conventional.

Last year, Halperns' increased its sales by more than $20 million, ending the year at approximately $155 million — not bad for a company that celebrated just its fifth anniversary this April. Things haven't slowed down in 2010 either, as the company has often seen sales grow a million dollars a week over the previous year. The Atlanta-based company has been recognized by local and national publications as being one of the fastest-growing privately owned companies.

While the company may be relatively new, the founders have a long history of success in the meat industry. Howard Halpern, chairman, has been a part of the meat industry since 1966 and founded Buckhead Beef in 1983. CEO Kirk Halpern joined Buckhead Beef in 1989, and many of the people who are now part of Halperns' management team came on board a couple years later. Buckhead Beef was sold to broadline distributor SYSCO in 1999, and the management team stayed with the new owners and kept the business growing. In 2005, the founding family left the company and started Halperns' soon after. Many key managers and other employees followed. "Success comes from the quality of the people you have with you," Howard says. He notes that the executive team — including Ray Hicks, president and chief operating officer, Ray Farmer, executive vice president, Jody Hicks, vice president, and Laura Barnard, chief financial officer — have been with him for over 20 years. Also a part of the management team is Lynne Halpern, who has worked alongside Howard since the founding of the family business. Howard notes that managing accounts receivables, especially during rapid growth and challenging times, is a tricky business. Fortunately, Lynne and her team of industry veterans with decades of experience watch over the money. "We were tremendously successful," says Kirk, "and now we've brought that success to Halperns'." Along with increasing its sales and profitability in 2009, the company also took on projects that will ensure continued growth. "The exciting thing is that we expanded into two additional cut shop facilities in Florida," says Kirk. "At the same time, we continued to increase sales, and the expansion did not adversely affect our profitability."

Halperns' caters to white-tablecloth restaurants, hotels and country clubs, along with mid-range, family-style steakhouses. While the company has some multi-unit restaurants among its clientele, Hicks estimates that 60 percent of the customer base consists of owner-operated properties. Many of those owners work closely with the Halperns' team in developing their cut steak specifications, even coming to Atlanta and visiting Halperns' state-of-the-art facility. Halperns' takes a partnership approach with its customers to develop the specifications that will exceed the diner's expectations and is cost effective for the operator. Once the specs are agreed upon the operator is able to call Halperns' one day with an order and get it delivered the next.

"We deliver next day through the entire Southeast, and we deliver multiple times through the week to the Midwest and Northeast, and as far west as Dallas, Texas," Hicks explains. Along with providing top-quality steaks and chops to its customers, the company also offers poultry, game, lamb, veal and fresh and frozen seafood. Farmer, himself a Certified Executive Chef and a past winner at the Culinary Olympics in Frankfurt, Germany, notes that the company's salesforce puts considerable emphasis on consulting and problem-solving, along with selling product. "We're interested in helping our customers grow their business and be successful, because we realize that, as they are successful, we will continue to grow," he explains. Download Full Story